The UNESCO hike at the Royal Drottningholm's fantastic surroundings lets you glide away in the land of dreams. We "move" to the end of the 17th century and Queen Hedvig Eleonora. Under the leadership of the castle architects Nicodemus Tessin d ä och d y, she takes the initiative for the baroque garden. The garden, which is adjacent to the castle, is surrounded by four-row linden alleys. The architects were inspired by newly laid out castle gardens in France where the ideal was strict, disciplined and symmetrical.

In addition to the framing of linden alleys, the baroque garden includes the embroidery part closest to the castle, which consisted of a richly composed pattern of cut boxwood hedges and colored gravel. Then the slightly higher water part with the smaller fountains and the Hercules Fountain in the center, cascades and bushes and as a background the large forest called Stjärnan.

The baroque garden decayed during the 19th century but was restored in the 1950s and 60s on the initiative of Gustav VI Adolf.

In the middle of the 18th century, the garden around China Castle was laid out. At this time, people began to abandon the strict garden ideal of a more natural park. Queen Lovisa Ulrika was impressed by the new ideas and had China Castle architect, Carl Fredrik Adelcrantz, plant the chestnut alleys around China as sight streets into the landscape.

The bushes east of the castle were planned as arbors, with large cages, aviaries, for, among other things, exotic birds. One of these cages remains but in very changed condition. Beyond the Bosques, a menagerie was established. There is only one pond left today. Behind the castle, a Swedish mixed forest takes over and which gives the area a "wild" and nature-romantic setting.

English park
When Gustav III took over Drottningholm in 1777, he wanted to incorporate the new park ideal from England, the natural landscape park, into the castle park. Fredrik Magnus Piper, who studied the English garden ideal on site, was commissioned in 1780 to create such a facility north of the Baroque garden.

The English park consists of two ponds with canals, islands and beautiful bridges, large lawns and trees in avenues and groves. Walking paths wind around the entire park and through it stretch sight streets, which provide views and views of the landscape. Finally, we walk on the Path of Love back down to the castle.


This is included 90 minutes guided tour in the garden
Availability: Few steps, but uneven surface makes it difficult to move with children trolley or wheelchair.
Minimum 4 persons. 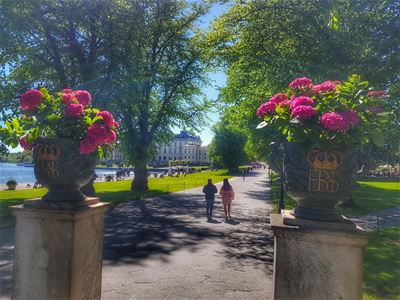 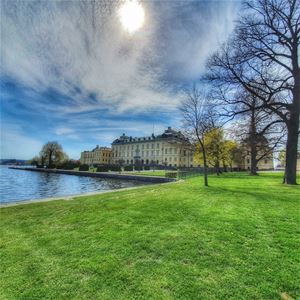 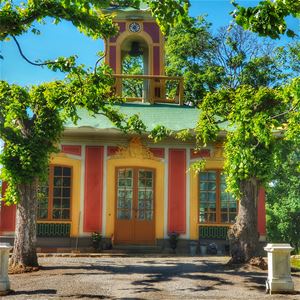